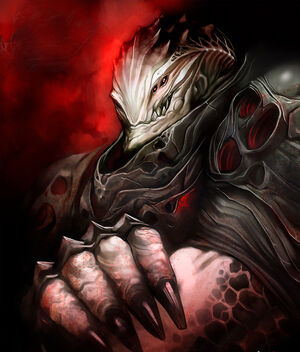 In the eyes of wide masses, Hermes is undoubtedly the most significant public character in the modern history of Coraab. For others, this most influential Coraabian "xalien" is the personification of self-interest, jobbery and high treason. Hermes has been leading the InCorps - or, rather, he has been the InCorps - for over three-quarters of a century because he co-founded this military juggernaut and is in charge of it for the remainder of his life. In fact, Hermes is simultaneously the commander-in-chief of military forces and the supreme political leader of Coraab. His opposition, consisting mainly of the Unliving, argues that it is very dangerous to concentrate such power into hands of a single being that does not even come from Coraab.

There is simply no information about Hermes' arrival on Coraab or his activity before 3900 Tu. Alarmingly, Hermes is currently answering to no other authority. He was nominated unanimously as a candidate by the Circle Council, which he presided for many decades. At the first impression, Hermes charms anyone with his nonchalant politeness. His rivals, however, describe him as a brilliant master of pretense and subterfuge.

Well-concealed sources informed the Supreme Skelethor Onmom about Hermes' personal collaboration with several ligans. According to some conspiration theories, Hermes is not even a Searth - allegedly, he is a Nu'Bael who wants to gradually seize control over the entire Coraab with his intrigues. The InCorps condemned this speculation as an insulting spread of false information.