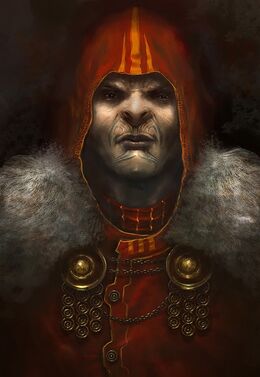 The name Honta gradually ceased to be used in modern miner society - rumor has it that it was bound to bring bad luck to its wearer.
(Coraabia Artist: Markus Lovadina)

In 2770 Tu, the power over the centropolis C'Ora was seized by the so far overlooked and not very well known Tal boter Honta. The young industry-man was believed to be but a well-placed puppet of real rulers and as such got nominated to the position of C'Ora governor, despite protests of anti-technology movements, which enjoyed significant popularity. Soon after his introduction to the office, he quickly solidified his power and smartly escaped the influence of his powerful patrons. He pushed through a new social system supporting the masses of poor Miners - who later became solid foundation stone of his government. He financed construction of new boter complexes that were supposed to produce sufficient number of machines to replace the work of excessive numbers of the unliving citizens, whom Honta despised. These got more worried in the moment, when the talish elites chose Honta as the governor of the city for life.

Absolute power corrupts absolutely and the originally enlightened approach changed into a period of suffering under Honta's brutal rule. The act known as "revitalisation of the unliving citizens", which the Miners welcomed with joy, was nothing less than a genocide of the unliving tribes. Instead of service units, the boter factories sent the first Sado units to the streets of C'Ora, which unleashed hell that took its toll across the whole society.

It is a paradox that Honta's fall was not caused by the unliving themselves, but by the warring miner radicals. In their eyes, Honta's guilt was not in the massacre of the citizens, but in plaguing the centropolis with thousands of produced bots. The old seat of the governance got razed to the ground and Honta was publicly lynched. Before his death, he expressed his regret that he did not manage to bring the elimination of the unliving tribes to the end.