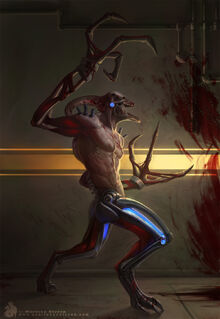 "We must not condemn cannibalism without taking wider perspective into account - only thanks to it have hypomors not joined the exodus of all living and Unliving from the Periphery. We should thank Tal that didn't happen". – Khoilei
(Coraabia Artist: Marissa Rivera)

Hypomors are relatively primitive but extremely dangerous and aggressive tribe of wild Unliving. Nowadays, they can be found primarily in remote areas of the Periphery, where they hunt the easily vulnerable lasturos - centuries of this practice have largely devastated the lasturo population. The neverending hunt for everything living and Unliving came at a price, however, as the numbers of potential prey decreased either directly due to extinction or indirectly due to mass exodus to other locations. In places where their unsated bloodthirst drove all the prey away, cannibalism is a common sight among hypomors. Due to their violent unlifestyle and frequent infighting within the packs, hypomors are characterized by one of the shortest unlife cycles among the Unliving - with the exception of their prey, lasturos.

Paradoxically, it was initially the lasturos who bred hypomors for hunting purposes, even though they do not longer remember this mistake as it happened at the very beginning of their cultural evolution. The naturally deceitful and rapidly reproducing hypomors quickly went out of hand and overran their shortlived masters.

Their unbound aggression makes owning hypomors a popular pastime of rich Coraabians. For some time, even the movie idol Ja-Barr kept several hypomors - until his new pets killed most of the guests during one of his renowned parties. He was fined eight thousand trins for illegal possession of aggressive predators.