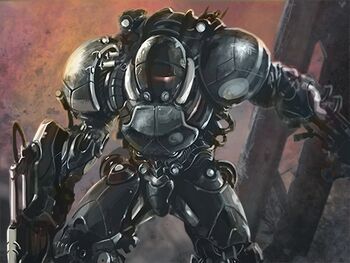 Ibar Dorn pictured during his last war mission - a campaign against the escaping fundamentalists from Nga-Na movement on the remote Xa-Sol • 3048 Tu
(Coraabia Artist: Mike Mu)

Ibar Sidur's offspring, brother of the dreaded Ibar Kador. Dorn ascended to the Lordly See after the so-called Brotherly War, which broke out shortly after Kador's death. The newly elected Lunar Prince restored the shattered economy and instigated a new era of prosperity in his domain. Ibar Dorn was a warrior to the bone. He loved hunting lunar game and carefully studied the martial art E-ke. He also voluntarily joined several military campaigns across Coraabia with his elite palace guard, which earned him fame and good contacts at high posts. Dorn greatly helped the Cosmopolitans during the conquest of rebellious Ri-Das; he also participated in the attack on Ultimo in 3004 Tu alongside Khoptidans. During his reign, Ibar Dorn certainly proved himself an able ruler, a role model for others in terms of his complete personal dedication.

Excellency 4 offered Dorn an honorary post of robocardinal for his services. Ibar held this post briefly but soon found out this tedious ceremonial function was not suited for him and stepped down with thanks to the robopope. Khoptidans were very offended because of that action. Dorn returned to Lordly Moon and lived a healthy life until his death. Eventually, he died in his sleep at the blessed age of nearly two hundred years.

A lesser known fact is that Ibar Dorn had his brother Ibar Mortal murdered during the scramble for the Lordly See. Allegedly, he wanted to manage it before Mortal would do the same to him. Throughout the rest of his life, Dorn was tormented by numerous traumas accompanied by nightmares. It is said Dorn spent his whole life fighting just to forget his shameful deed more easily in the din of battle.