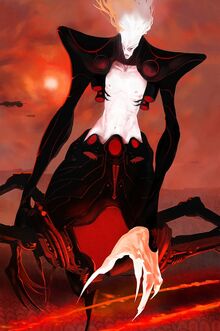 Kador has been violating the ethical rules set in stone by the House of Ibar centuries ago so overwhelmingly that we considered his termination as a completely legitimate step in solving the long-term crisis in the Southern Cloud. (A snippet of the trial testimony) • 2967 Tu
(Coraabia Artist: Carlos Villa)

Also called Kador the Mad. He is remembered as the black sheep of the esteemed House of Ibar. After death of his father, the liege lord Ibar Sidur, young Kador ascended to the Lordly See. The creation of this young man was considered successful (all members of the House of Ibar are sterile and they clone the offspring to avoid all dilution of their noble blood). Except for a rare disease which made all his pigment disappear when he was fifteen, Kador did not show any signs of mental illness for many years. He was always deeply interested in advanced technologies and he had them delivered to the Lordly Moon from the distant Cosmopolitan Worlds. As time went by, he spent less time reigning at the expense of many months spent in loneliness in his laboratories in the mountains. At that time, something apparently happened which changed Kador forever...

In 2938 Tu, Ibar Kador returned to the palace. Haunted by neurotic tremors, having a strange characteristic tic in his left eye, and resembling a bag of bones more than a grown man, he tripled the taxes and ordered death penalty for the most trivial crimes in his newly issued decrees. Three painfully long decades of graduated terror ensued. Tormented people of the Southern Cloud were rescued only by Kador's death.

Legends say that the executed wretched men were in fact a part of Kador's insane plan for creation of a superrace of clonable servants, who would replace the whole population of Ibar's people. Kador was pathologically obsessed with symmetry and purity and he often fell into a paroxysm of rage. The night during which he beat several servants to death with his bare hands proved to be fatal for him. The angry mob bursted into the palace and lynched Kador.