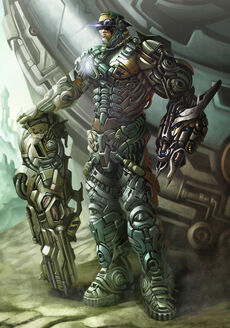 Succesor of Ibar Rejo, currently only living member of aristocratic House Ibar. Ambitious Ratan alway longed for adventure and didn't care about mundane responsibilities of lunar lord. He left for Ulgor in his early years, forcing Ibar Rejo to create second-born clone, Ibar Kira, to be put on the lunar throne. While Ibar Ratan explored Coraabia and faced many dangers and adventures, situation on his homeworld was turning worse - Ibar Kira died and few Tu after him old Ibar Rejo himself died. Meanwhile, Ibar Ratan obtained citizenship of Cosmopolitan worlds and after a while even joined the Liga as the commander of Team 9. After learning the news about catastrophic situation in Southern Cloud, he unofficialy left Liga and rushed back home.

Now finally home, Ibar Ratan found out that byrocratic tetra-kings seized the power and his own people believe that he is long dead. Ratan soon resigned, gave up on hope of reestablishing the lordly throne and returns to Agan and the Liga. Here he is punished for leaving his previous office, degraded and sent to Team 1. Ibar Ratan doesn' get along with new teammates.

Ibar Ratan is now trying to find excuse to use Cosmopolitan worlds' help and reclaim Lordly moon back for House Ibar. It's also the only reason he is still member of the Liga. Another great problem Ibar Ratan faces is destruction of old cloning hall (place, where Ibar's created their identical descendants) in hands of the tetra-kings. One of the most ancient and longest ruling aristocratic houses of Coraabia is now in existencial crisis.