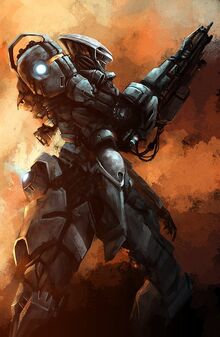 Ibar Rejo allegedly underwent up to several dozens of revitalization procedures during his life as a consequence of serious wounds. It is a miracle he even lived to such an old age.
(Coraabia Artist: Joebert Zaide)

Ibar Ratan's predecessor, the last official prince of the Southern Cloud. The House of Ibar has been famous for its martial prowess for centuries and Lord Rejo fulfilled these expectations to the letter. In his early days, Rejo received elite training at the DaruDar military academy; he also trained fighting with an extension epee and achieved the highest level of proficiency in E-ke. Literally obssessed with war, he proudly displayed all sorts of scars on his body to his courtiers and delegations when he reached an advanced age - each scar had a dramatic and gripping story tied to it. Rejo was an educated and charismatic man - in times of peace, he spent long nights reading old logs in his chambers, from which he drew extraordinary knowledge. Death met him in his prime and at full strength; Rejo fell in battle while defending the Lordly Palace during the invasion of Nu'Khnuzuuk's acolytes.

In his youth, Ibar Rejo lost his right arm in one of the training duels. However, he refused an offer from Agan physicians to grow a new limb and rather let himself made a perfectly customized robo-arm on Mogra Troi. There was a thread at the end of the arm, on which any heavy caliber weapon could be mounted with ease. Rejo's powered exoskeleton was allegedly able to carry up to four tons of weight.

For routine princely duties, Ibar Rejo liked to use his two clones; for the sake of perfect illusion, he even let them grew without their right arms but with very characteristic scars all over their bodies. The clones then basically ran the operations of the principality, while Rejo fully indulged himself in conquering expeditions and self-education. Some say that Ibar Ratan beheld his real father for the first time only at his funeral.