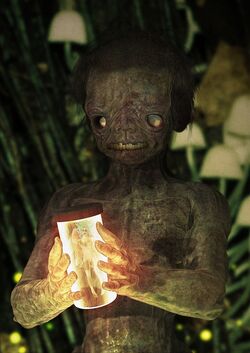 Called ilokha in Coraabish. The name is derived from the word ilokho (cor. recycling pouch).

Ilokaji are one of the handful of higher Unliving tribes living on Coraab today. Today, Ilokaji are the most populous traditional ethnicity on Coraab. It is an ancient and distinct nation that inhabits all corners of the planet. 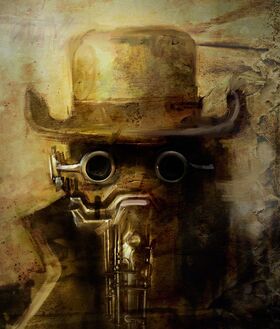 It was Drugar Ulcerpus who led the Ilokajish resistance against the Wild Bones and Atomos during the era of the Unliving states.
(Coraabia Artist: George Dimitriou)

Ilokaji gradually settled all over Coraab in the course of the long period of the Middle Dump.

-3450 Tu – Several Ilokajish settlements in the Rusty Dunes joined together, creating the Empire of the Circle (also Patriarchy of the Circle). This superstate was intertwined with Coraabian history for almost two thousand Tu. The largest Unliving centropolis of this age was the Ilokajish city Tor'Thubo.

The Ilokaji were always very reserved in their relations towards Zombs and Atomos - their protracted tribal strifes often ended in a bloodshed. This became even more true during the period of the Unliving states, when Zomboss and his Atomic Empire subjugated vast parts of the Ilokajish domain. The Empire of the Circle was destroyed and Ilokaji fled into the remote cornerns of the Periphery.

Eventually, Ilokaji allied with the Wild Bones and other Unliving tribes and routed Zomboss and his Atomos. It seemed logical that the Ilokaji would restore their previous dominance and bask in an era of prosperity. The sudden arrival of Miners on Coraab was a fatal blow to these expectations.

The Ilokaji systematically harassed the Miners because they viewed them as aliens and usurpers. However, Tals reacted swiftly and with excessive force. The weapons of mass destruction instantly evaporated a significant part of the Ilokajish population. The rest suffered unspeakable horrors during the centuries of enslavement in Tal colonies. In these forced labor camps, 45% of the remaining Ilokaji on Coraab found only death.

Today, the Ilokaji are full-fledged citizens of the Coraabian society - proud members of a race with rich culture and traditions. Some eventually found their way towards Zombs, others still keep the previous resentment. Simply told, Zombs control Min'Ora while the zatímco Ilokaji dominate the central C'Ora. Ethnic wars seem unlikely - every Unliving tribe is fully occupied with its own problem. The common ground among the Unliving is the shared xenophobia against "xaliens" that arrive on Coraab from neighbouring worlds.

Ilokaji are rather resilient but their cycle of unlife is comparably short: usually around 80 - 240 Tu. They do not breathe or eat, but unlike Zombs, they procreate and so their numbers are kept mostly constant. Their name Ilokaj is derived from the recycling pouch (cor. ilokho). It is a peculiar and unique object - once an old Ilokaj realizes his time has come, he lets himself be sewn inside a pouch (which is distantly reminding of the Zombic ree), where his body gets quickly dissolved and completely recycled in the form of a new specimen. The new Ilokaj leaves the pouch after roughly two Tu as a "complete" adult.

A single recycling pouch can be reused multiple times but it has to be repaired or replaced after several generations. Ilokaji create their own pouches according to a secret blueprint and they guard them as their most sacred relics - working as a poucher (cor. ilokarh) is one of the most respected trades an Ilokaj can pick in the Ilokajish society.