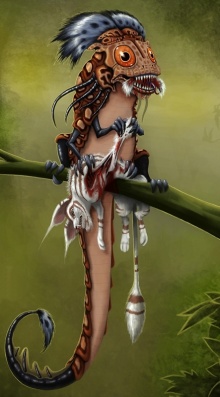 Suddenly, they were everywhere! All members of the expedition had immediately run away, but in seconds only gnawed torsos of them remained. I've never seen anything so appalling before! - Ccord Bokh
(Coraabia Artist: Augusto Kapronczai)

This at the first sight harmless creature has been a real mystery for xennologists since its discovery in 4255 Tu. At first, imballir appeared as a peaceful herbivore that calmly consumed surrounding vegetation and para-mushrooms and even established a warm personal relation with observing scientists. However, the unfortunate explorers did not know that on the other side of Xö, the regular period of evaporation caused fatal changes in the ecosystem, spawning parasitic migrant clouds. Facing the raid of billion small animals, the local population of imballirs literally went insane and left its territories within a short period of time. Imballirs' bodies release a hormonal cocktail of protective elements that dramatically change their appetite. These crazed imballirs do not even hesitate to attack members of their own kin living in colder areas.

Bitten imballirs from affected areas often catch an aggressive form of rabies. This illness turns them into fierce killers, who do not hesitate to attack anything alive in sight. Their metabolism shifts into such an excited state that imballir's self-preserving instinct kicks in and demands a constant inflow of food. Its eyes become inflated and its teeth become leaner to facilitate the intake of meaty diet.

In spite of its rather small stature, imballir has incredibly strong yaws able to rip large chunks of meat from a still living prey. After the incident in 4262 Tu, a massacre of CuCaanish expedition, the export of imballirs from Xö was strictly prohibited. Later, several xennohunters from DuRuukur tried to capture few specimens for export, but the hunt quickly turned into a fight for their own survival.