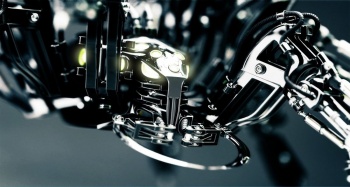 Most autonomous artificial beings have an in-built way to bypass their interware. Specialists in doing this are mostly boters. Hacked bots have caused lots of damage in the past.

There are many programming languages, advanced neuron network, and data matrixes that give machines their intelligence. Each world uses its own processes and coding. The most advanced interware is traditionallz created on WaalkWak and Khoptid.

Civilized worlds have been adopting traffic systems that are completely guided by artificial intelligence. High-grade interware can be thus found in civilian transport vehicles as well as measly taxi-gravs. 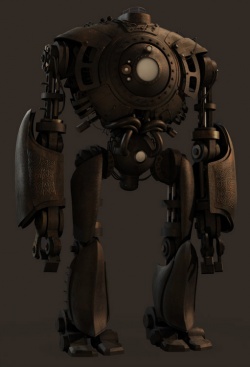 Torso of a bot from the series Manoora which a giant flop in its time. Due to undercover cost-cutting that led to installation of trash compactor interware in these bots, the model had to be quickly pulled from distribution. • 3669 Tu
(Coraabia Artist: Martin Damir)
Retrieved from "https://coraabia.gamepedia.com/index.php?title=Interware&oldid=22277"
Categories: