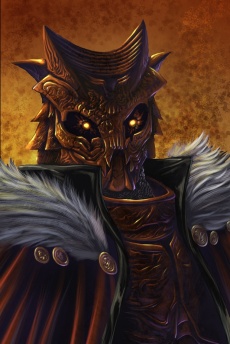 The Irradiated One is one of key spiritual authorities for most of the Unliving tribes even in these times. He traditionaly resides in Min'Oran Bonehall, where the institute was formed by Wigitan primus Raabdwa himself millenia ago. One's influence is strictly separated from city's governing garniture. Officialy, he has no executive power, but most Unliving take his ideas and views as an undeniable sacrament. Becoming the Irradiated One is no simple process, it takes very long time. Only those who really helped their community can even dare to hope. Because the Irradiated are always chosen from the ranks of Zombs, only a few dozens presided on the holy Bonehall throne.

After the arrival of the Miners, the Irradiated One stood by the Min'Oran lords as Zombog and Kowee and refused any territorial expansion towards the gates of Bonehall. His resolution ignited active antiminer revolts among the Unliving, but also earned the Irradiated One great disfavor. After the occupation of Min'Ora was the office canceled and stayed so for few centuries.

Becoming the Irradiated One means great sacrifice. The Zomb is first irradiated with gigh dose of radiation for several Tol, virtually burning his skin off. Then, in penitent ritual of KaSontharaa, he casts away his name and publicly burns his own ree in thermo-vortex situated in the Bonehall. The function is terminal and Zomb may never shrink again in his cycle.