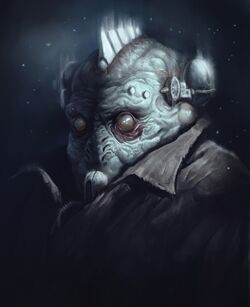 Even a brief mention of this name invokes fear and anxiety in majority of Coraab population. The one carrying it is one of the most influential criminal bosses on Coraab, infamous for his unbearable stinking body. The usually unpleasant zondan musk tends to change during the aging process into a stinking cocktail of substances, which causes vomit reflexes for majority of races, causing them rashes and eye-soreness. Interestingly enough, this all happens despite the skin-wax - which is the source of this "aroma" - being the basis for the most expensive perfumes in Coraabia. Kargando's life is full of such paradoxes. The ambitious Zond cooperates with Zapraskal at first, but later gets into an alliance with the cunning Lin Rezzt. The powerful trinity of the criminal bosses stands at the peak of the evolutionary pyramid of criminality on the area of Cor'Og.

Kargando is the sole supplier of precious substances to many cosmetic companies, including the traxollian mega-corporation Banasau-Kelge. To reach this,he uses not only the zondan wax, but also brutal methods, which he uses to scare all potential competition. When cucaanish diplomat Ccord Garoccen decides to make his dishonest practices public, Kargando does not hesitate to immediately order his assassination.

A sordid lie strikes the final blow into the once-friendly relationship of Kargando and Zapraskal. The old Zond invites Zapraskal to the usual game of thu'ku. Closely before his arrival, they are both informed that their joint secret Rybbt warehouse was burned down to ashes, convincing them that the other one is responsible. They both cancel the meeting, having no idea that they have become victims of manipulation triggered by the cunning Lin Rezzt.