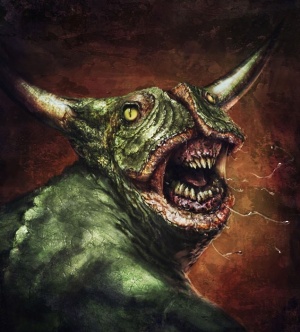 Karnoruuk was once a protagonist of an advertising campaign for the sole seller of Hairy Lager on Coraab. The slogan said: Flavour which will turn your valves inside out!
(Coraabia Artist: Nathan Geppert)

Also called Ihaco-Donnu (silent head) in scholarly literature. However, Coraabians always use the derogatory term plothar (valve). Karnoruuk is a primitive and fickle creature, even the most benign external stimulus sends it into great fits of rage. For long millenia, this ruuk was evolving in an isolated biotope - H-Khuun, plateaus encircled by methane lakes. These natural formations of Ymef are famous for their windless air and specific acoustic conditions. Being trapped and transported to chaotic and noisy environments is thus an eternally traumatic experience for every karnoruuk. Throughout the whole Coraabia, karnoruuk is usually raised as a fighting breed used for protecting its owner or for bloody arena fights.

Karnoruuk does not emit any sounds since it completely lacks any kind of speech organs. Its "face" consists of valves which are capable of unfolding themselves and which are covered by sensitive auditory cells. This aural sensitivity is sadly coupled with a major disadvantage. When facing a disruptive sound, karnoruuk turns its maw inside out in a defensive reflex, leaving itself even more exposed to any louder noise. Its complete paralysis can then be achieved fairly simply - its owner needs to use as little as an old loudspeaker or some corabit cymbals.

Karnoruuk is notorious on Coraab due to its involvement in the so-called plotharion, an incident during which huge fortunes went down the drain because of a simple misunderstanding between the two parties. Coraabian establishment signed a deal with Ulgor, buying a huge brood of karnoruuks which died out immediately upon its arrival on Coraab. No one cared to verify the fact that the polluted atmosphere of Coraab was unbreathable for karnoruuks.