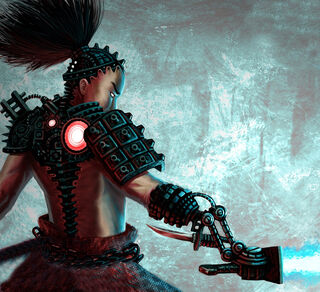 Swens Kassio was born into a well-off Kogan family that own large agricultural estates in the southern hemisphere. Ever since he was a small boy, he bothered his nannies by his unquenchable thirst for adventure, manifested in endless role-playing campaigns and admiration for the almighty Liga, which had its seat on the central Agan. At this young age, he also convinced his parents to let him attend a local seminary Mo-Kai, where he practiced the art of extension epee. In 4197 Tu, Kassio earned the title koga-kai and realized that farming on a quiet and boring Kogan was not the true path for him. He set for the central world and applied for a membership in Liga. He succeeded only on his eighth try - ligan Dogont, leader of the famous Team 2, took him under his wings.

Swens always hated firearms, they terrified him. On the other hand, equipped with his extension epee, Kassio was hard pressed to find an equal in a melee fight on Agan. However, other ligans often mocked him for this old school approach and a certain ""provinciality"". Maybe those were also the reasons why Swens grew more and more bitter and eventually started to hate the once lauded ligans.

One day during an argument on the training grounds, Swens Kassio publicly killed two ligan recruits. His superior Dogont tried to stop him but senseless Kassio turned the weapon against him as well. In self-defense, the chief of Team 2 threw him aside - but falling Kassio dropped his extension epee and was sliced in half by it. Young Swens succumbed to his wounds almost immediately.