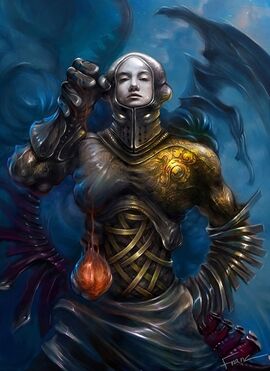 An iconized tableau of a Khoptida. Modern cloaking devices and jammers made it nigh impossible to shoot actual footage of these elite Lopzaan guardians.
(Coraabia Artist: Yin Weiye)

One of the first commandments of Excellency 1, the first robopope of the new Khoptidian religion, was: Let us summon the forces, which will guard our world in new times, one like another. Khoptidans (then still living on remote Ultimo) were eager to fulfill his Excellency's wish to the letter. Thus, the first Khoptida arose – the guardian of peace, the closest servant and protector of the Robopope-series. In order to strictly follow the sacred log, Khoptidas have been cloned for centuries from a single perfect specimen of a girl selected in ancient times by anointed holy men of the holy world (... one like another ...). These elite guardians undergo lifelong training, supposedly the toughest any Coraabian world can offer. Their numbers have been fluctuating throughout the history, though they might never exceed the number 25.

Thanks to the quantified brains, Khoptidas learn an incredible set of tactical and combat skills during their lives. The quality of their corabit-ceramic armor, in which they appear in the official ceremonies alongside His Excellency, knows no equal. Even the Liga itself looks up to Khoptidas in respect, often presenting them to its members as an image of perfection worthy of careful emulation.

Khoptidas have never allowed even a single attack or assassination attempt on any of the Holy Fathers of the Khoptidan mecha-religion since the onset of the rule of Excellency 1. The current robopope Excellency 15 has twelve Khoptidas in his service. It is imperative that no more than 25 Khoptidas exist at the same time - supposedly so as not to overshadow the twenty-five Excellencies who were once destined to rule over Khoptid.