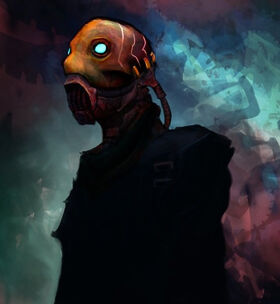 You won't see much of Knecht's drotts anymore. In recent he barely removes his mask during his duty.
(Coraabia Artist: Steve Hamilton)

Police officer Hennko Knecht pondered a name change many times throughout his career - in the Coraabian slang, his surname actually means incompetent or a dolt. Eventually, he decided to keep his name "heritage" and prove his worth with heroic deeds in the name of law, demonstrating that one can overcome biases and stereotypes with hard work. Nowadays, nobody mocks him at the headquarters - kop Knecht is popular for his sense of humor and a friendly nature. Those traits also helped him to become the host of the annual Sector police banquet held during the celebrations of Rokha'Tu. Together with Ajaarpa, he was able to solve many messy cases - many of their colleagues predict that the young Knecht could achieve the prestigious rank of Armo within a few Tu.

In the beginnings of his career, Knecht had problems with his eccentric hairstyle - the new Coraabian regulations ordered the city kops to observe adequate hygiene standards. Knecht's hair drotts are not allowed to come into contact with water as they would fall apart. Shortly after he started his duty, the kop bought some special non-hydrogenic cleansing ointments from Orbotosh and hid his face behind a special facial respirator. The problem was solved.

Knecht's forehead tattoo reveals his previous membership in an obscure sect Sokobana. The tattoo is in fact a bio-spam which cannot be removed but thanks to the full face mask, only a handful know about it. Knecht keeps telling to all his friends with a smile it is just one of the decorative motives of his Miner family.