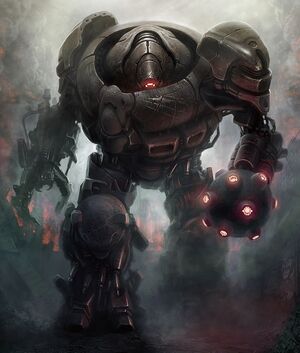 Kodo-bot with a fully charged quantar, ready for action. The Kodo series is still the most destructive autonomous machine ever designed for land-based warfare.
(Coraabia Artist: Alexey Polarlex)

Centuries ago, the Kodo series was the pinnacle of WaalkWakian military technology. Initially, their sheer devastating power meant a strict embargo was imposed on their exports. However, the conditions were gradually softened and Kodo-bots have successfully expanded to the four corners of Coraabia. Their only drawbacks are sky-high prices and enormous energy consumption. On the other hand, a fully activated Kodo-bot is more than capable of razing an area the size of small city to the ground. This bot is driven by two independent tokamaks. The first one handles the sensomotoric functions, interware and secondary weapon peripherals. The second one then fuels its characteristic weapon, which plants fear in the hearts of its enemies – a multi-chambered quantar with a terrific power output of 5 gigawatts.

Save to admit that the titanic Kodo-bots are well beyond their prime today, serving way past their life expectancy. Wakian boters released the last, fourth generation of the Kodo series in 4030 Tu; from that point onward, no official innovations were implemented. Nevertheless, armies and all sorts of private entities in possession of Kodo-bots never hesitated to train their own experts to maintain these deadly machines in working order.

These colossi are more than eighty-meters high but quite paradoxically, they seldom see real action. Usually, all that is needed to force the planetary government to start negotiating its possible capitulation is deploying a small battlegroup of Kodo-bots on the surface. Sols once applied this tactic with great success, acquiring a sizable part of Bau-Zonda. It was a bold move given the fact that by that time, their Kodo-bots lacked a single functional quantar.