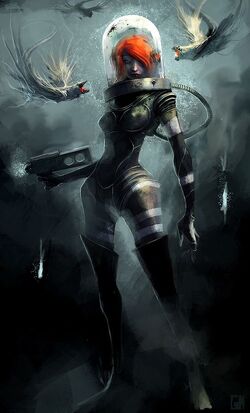 The heart-breaking story of the twins Jogga and Kogga recently swept through the sub-net like a shock wave. Under the weight of a family tragedy, the young girls slowly became enemies, with Jogga accusing Kogga of being responsible for the death of their mother. Kogga, however, has always claimed that she was far away from her mother when the disaster struck. Unlike Jogga, who decided to leave Mogra Troi and slowly became a merciless revolutionary on Bolga, Kogga decided to join the Mogra Troi army in order to cleanse the name of her family. She soon became a respected strategist, even receiving high honors from prefect Tok-Nel after crushing the Ior-Lan branch of the terrorist group Bai'ala in 4265 Tu. The difference between the two sisters simply couldn't be greater.

Kogga was always trying to reconcile with her sister - at first virtually but eventually deciding to travel to Bolga by herself. Jogga resolutely refused to see her. Kogga bribed her henchmen to let her through but when she finally stood before her sister, Jogga immediately assaulted her. Kogga barely managed to retreat back to Mogra Troi, heartbroken from fearing she would never see her sister again.

In truth, Jogga and Kogga were never truly twins, but only identical copies of their infertile mother. Originally, there were three of them, but the young Togga died early due to a rare degenerative disease. The truth was never revealed to the twins, as cloning has never been too popular on Mogra Troi and there were fears of possible discrimination.