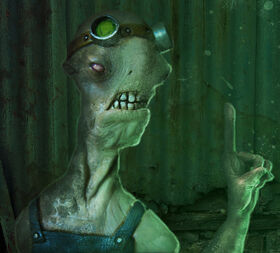 When you ask a konstruquakk where he was on vacation this year, you will just embarrass him - in wet or dry speech, this term simply does not exist. -Sol Wukk
(Coraabia Artist: Andreas Knoll)

Konstruquakks, more often nicknamed "quakks", form the backbone of labor forces of Soop ghettoshipyards on WaalkWak. Quakks are divided into seven classes based on their specialization. Most of them never leave ghetto - from cradle to grave, they are told that nothing great awaits them behind the walls of the 'yard. An average quakk earns a very decent pay and living standards in Soop community are better than good. Quakks specialize in the manufacturing of water and air crafts, control systems of spacecrafts and certainly enormously large series of bots. There are eleven Soop ghettoshipyards - nine on Waalk and two on Wak. All of them thrive to this day. Konstruquakks are widely known as reliable and highly skilled professionals.

Quakks speak two languages among themselves. The so-called dry speech is used for normal conversation and is divided into short and long quacks and gasps. The wet speech, on the other hand, is a highly technical language which can only be spoken under water. Quakks use a complex system of bubbles filled with sound fluid to exchange long sentences of information between themselves, including complex formulas or equations.

The Soop race has four sexes, each performing its part in the genesis process. Soop'q fertilize themselves and lay embryonic matrices into bodies of Soop'ul. Soop'ul then form something like an egg around the embryo whose shell matures in a nest for around a single Tu. Then the Soop'qa comes and fills the shell with its genetic material. Later, Soop'i broods on the egg for few months and cracks the egg's shell at the right moment.