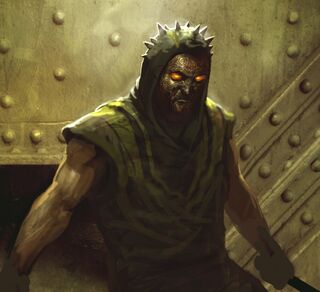 Kraik is one of Zapraskal's "fearbringers", though still only for probation. He is preceded by his reputation as an unhinged fanatic and this activist past is not quite to Zapraskal's liking. Kraik used to be a member of militant extremist movement X.I.R., which fought for absolute control of Miners over Coraab. He pushed for further radicalization and eventually founded its paramilitary cell Arm of Nakataar. Kraik and his lackeys did not hesitate to resort to open violence against the Unliving and - on "productive" days - also against the "crooked xalien scum that has to be drowned in the sea of Rust". After a violent coup, Kraik even became the leader of the entire movement but it took only a single Tol before he was arrested by urban-ops for attempted arson of a xenoghetto.

In prison, Kraik spent his days studying Tal history and cementing his faith. Nevertheless, he also learned to hide his thoughts to prevent harassment from fellow Unliving and xenic inmates. Eventually, he earned a reputation of an intellectual and established contacts that allowed him to get personal protection in exchange for valuable advice. After his release, Kraik leveraged his new connections to land a spot in Zapraskal's gang.

One of his first deeds as a free man was settling scores with members of movement X.I.R. who snitched his xenophobic plans at the court. Kraik made sure they would forever regret throwing him under the grav to earn themselves paroles. The entire movement then disintegrated in 4276 Tu for lack of willing members. Undaunted, Kraik still carefully hatches plans for purging Coraab from the unworthy.