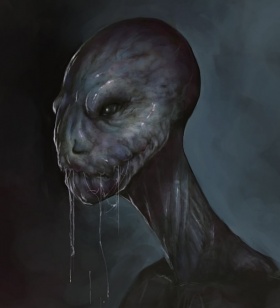 Kucan's salivary gland problem could have been easily solved by the feldshers on Coraab. If they were given the chance.
(Coraabia Artist: Frank Perez)

Kucan spent his entire childhood in a mining colony on Bothra. From his birth, he suffered from a rare malfunction - his salivary glands created excessive amounts of disgustingly smelly spittle, earning him bullying and mockery from others. Nobody on his homeworld was able to help him and for this reason, his desperate parents sent him to Coraab with hope of finding experts able to cure him. Soon after his arrival, naive Kucan was robbed of all his savings by a group of shady cylindors. His spittle problem thus remained unsolved and Kucan was left alone on a foreign world to boot. Coraabian administration did not provide him with any kind of help and so the young smelly Panuk's only chance to survive was to get caught in the downward spiral of crime.

Kucan picked his targets mostly among rich Ilokajs. It was a sort of a revenge, as it were the Unliving who caused his difficult situation. Every Haze, he used to break into their bivouacs and randomly stole various baubles he could find lying around. If disturbed, he cowardly fled the scene. He tried to sell his loot to local orbotos or xennoworts.

The worsening malfunction of his salivary glands spelled doom for the Panuk pilferer. During one of his burglaries, his unbearable smell woke up a watchdrinh. Kucan was scared to death and fearing the Unliving beast, he jumped out of a nearby window. The fall from a seventh floor caused him heavy injuries and paralyzed him. Before the called feldsher arrived to his body, Kucan choked on his own spittle in a short agony.