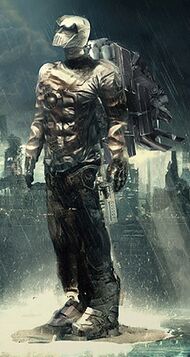 Should Kurro take off his facial mask on Coraab, he would fell unconscious in few tens of minutes.
(Coraabia Artist: Jay Brooks)

From the beginning, it was clear it would not be a smooth ride for this young immigrant to Coraab. He was tens of official obstructions and approval processes away from his dream job in the security forces. But Qel-Kur-Rosanni gritted his teeth and withstood all the bureaucratic bullying. He reached his target seven years after his arrival when he obtained the position of Kop in the C'Ora's Sector 4 – this happened only thanks to Kurro's excellent tactical skills. As the relations of Coraabian government and Qu-Puic Korate got dramatically worse after the events of 4249 Tu, Kurro was soon demoted to a position of a rank-and-file sergeant in a rookie boot camp without being given any reason. It took him eight years before Kurro was able to return to Sector 4. The old suffering was soon compensated by meeting his future life partner, a young and beautiful Bada.

Kurro suffers from the so called Nol-Qork cough which attacked his respiratory system during his childhood. This rare disease prevents this young Ekhro from undergoing a trivial procedure that would allow him to breathe in the polluted Coraabian atmosphere just like most of other immigrants. Therefore, Kurro is forced to wear a specially modified respiratory mask for most of the day.

Kurro knew well why he was set aside by his Coraabian superiors. It was deemed undesirable that the last adoptive son of the highest Kor from Qu-Puo, who was brought down under dramatic circumstances by his own government, would be working in a government office of a loyal ally of the newly established anti-kor Qu-Puic clique.