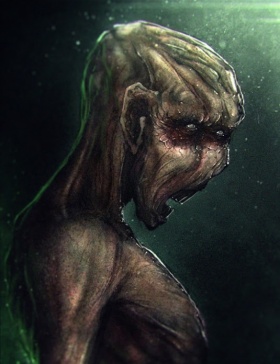 It was never Kyzoll's dream to end up working the belt in a pukecotin factory. Eventually, the cunning Ugze used all kinds of lies and accusations to work his way from an ordinary worker up to the forman's post. Once his opportunities to gain extra money increased, Kyzoll became a greedy beast. But not even his slimelike character, curry favoring and bribes could move the deeply rooted system of heriditary posts of the Traxolian industrial hierarchy. Facing such impenetrable obstackle, Kyzoll decided to change his strategy and attempted to poison the factory director. His feeble plan was discovered very early, though and the Ugze foreman came into interest of local security agencies. Kyzoll soon understood that it will be much better for him to change the air and used some of his saved (stolen) money to wobble to Coraab.

Kyzoll's dilapidated body was so soaked by chemicals and blitkotin after many Tu spent in the agonizing conditions of the Traxolian factory that the officers of the Coraabian ImmaDOR almost sent him back by the next scheduled Strunn. The biochemist who was in service that day stated that the Ugzen immigrant breached the allowed blood toxicity values and that it is almost a miracle that he is still alive.

In the end, Kyzoll passed the entry check and settled down in C'Ora. Soon after, by using his trickeries, he stripped the local Traxolian immigrants living in the RamaX poverty district of all their savings. He attempted to breed illegally imported Ruuk races, but his effort endsed up with all the animals dying. Kyzoll sold their poisonous flesh to an agriculture food processing plant, which resulted in tremendous damages. It is very hard to predict what action can we expect from this stinking Ugze next.