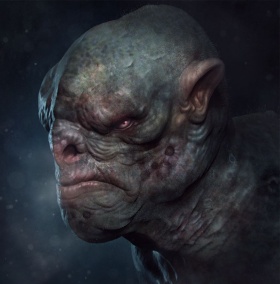 A second-grade theater actor, named Ruygo Reenher at birth, managed to hold onto the stage for almost twenty Tu - despite an evident lack of talent. Lanzo finally accepted a contract for a famous XenoShoka cabaret, a decision that became fateful for him. In the cabaret, the actors had to quite commonly undergo surgical enhancements to better represent the imaginative monsters from the absurd theatrical plays. The disreputable cabaret doctor kept "enhancing" Lanzo to such extent that the insecure cabaret-actor lost his mind and one day ran away from the group. After a series of dramatic operations, which were supposed to return his visage to the former state (which did not happen), Lanzo returned to XenoShoka. His suffering ended just a few Tols afterwards with a tragedy - a bomb explosion torn him apart during one of his performances.

After his initial escape from the cabaret, the Yusut's joking company became his retreat - a group famous for unorthodox improvised performances. As an example, their members kept attending funerals, where they parodied the mourning family, or kept pouring the most expensive drinks over homeless creatures. Not long before his death, Lanzo said that he was much happier with Yusut than anywhere else and that he should have never returned to XenoShoka.

Lanzo was a stepson of a professional telepath, even though he never learned of it. Some of his father's inherited talent this might be one of the explanations, why the untalented actor managed to stay in his role for so long. There were speculations about a suicide after Lanzo's death, but it was later revealed that it was Yusut himself behind the bomb attack - he could not take that his new friend left him so early.