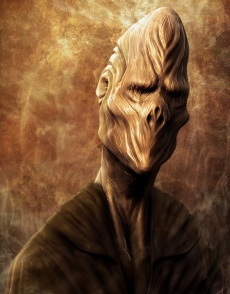 In the remote parts of Periphery where lasturos come from, these defenseless creatures often fall prey to the dreaded Unliving predators called hypomors. Due to their viciousness and deceitfulness, hypomors are the dominant race in the area and they are slowly pushing lasturos out of the region. Despite their relatively high intelligence and advanced skills, lasturos have failed to build any permanent settlements or higher forms of their own civilization. Therefore, the vast majority of them lives in an exile on the outskirts of the Coraabian civilization, which accepts them only as mere savages and primitives.

The exiled community tries to build up a Xot gon fund by collecting "tonates" from its members. The lasturos believe that, one day, they will be able to use that money to arm their nation and reclaim their homeland. Unfortunately, as most of them work as janitors and manual workers, it seems that this time isn't going to come anytime soon.

Since hypomors go crazy for lasturo meat, groups of smugglers kidnap lasturos from cities and use them as baits in their hunts. Captured hypomors are usually placed in amusement parks, arenas, or become illegal trophies of wealthy citizens. In 4258 Tu alone, more than two thousand lasturos were abducted from the streets of C'Ora as a result of this brutal business.