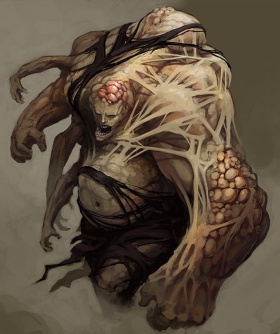 Latent - a grotesquely deformed monster. Yet under a layer of edema and swellings dwells a phlegmatic, almost indifferent worker.
(Coraabia Artist: Darren Bartley)

Just like in Coraabian heavy industry, most of the hard work in agriculture is done by the Unliving. A latent is a common term for all Unliving "peasants" but it is mainly used when reffering to a certain subtribe that exerts the labour most often. These latents live on remote farms in many-branched tribal unions with strict hierarchy. Unlike most Unliving, they reproduce sexually and incest plays a specific role in their mating. Through incestuous reproduction, these robust creatures willingly breed the so-called frenetics - primitive yet resistant beings who perform the hardest work. From latents' perspective, it is a purely rational way of obtaining labor force; outside of incest, they do indeed participate in relationships among different families.

Latents' organism has adapted to the hard work on fields to such degree that they automatically secrete vermin-repelling substances from their sweat glands. Yet the effects on their neighbors are nonetheless similar, causing dermatitis, diarrhea and intense gagging. Latents are also one of the few Unliving tribes who eat food (namely meat).

Due to severe criticism, artificial insemination is being used more and more often in breeding of frenetics, especially on modern farms run by more intelligent Unliving species. Most of the latents refuse to adapt though, and surprisingly strongly stick to the old ways which have no parallel among other Unliving tribes and which make latents deeply despised by the society.