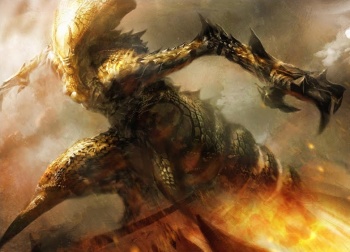 There are not many Unliving species that Miners would like to see crawl out of the reproduction vats. Yet there is one subtribe that Tals loved to breed - the leatheran, covered in skin of exceptional qualities. Tals saw a great potential in it's use. Leatheran skin if highly resistant to radioactivity and other deadly radiation and as so ideal material for inner layers of exoskeletons. Leatheran breeding was born shortly after Miners' arrival to Coraab. In times of greatest prosperity, breeding stations were build in almost all Tal colonies. Leatheran were numerous all around Coraab but eventually decreased to a several thousands because of illegal hunting. Their own protection nearly brought them to extinction.

When a leatheran loses a limb, it will grow back in one Tol. Miners abused this fact a lot, amputating vatters' arms on purpose. Skin off the regrown limb was, however, of poorer quality than the original one and so had to be labeled as second or third class. This leather was used mostly in the fashion industry.

Today, exoskeleton with leatheran components is more of a collector's item. Armor industry substituted the leather with durable materials such as bult-fiber and di-burothen. The most valuable leather-fiend layered exoskeleton is in possesion of Min'Oran Zomb Valigursai. His private exposition contains the suit of Ganree himself.