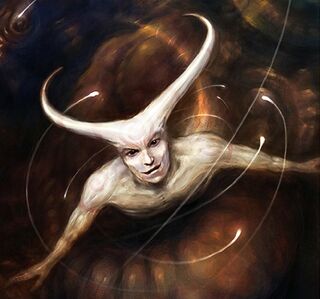 No one wants to let you see them. They say they're all ill and deadly dangerous. I say they're above all fascinating creatures worthy of our careful observation. - Xed
(Coraabia Artist: Yin Weiye)

Whereas whole populations of many Coraabian worlds are literally wiped out by the mycobacterial genus Lepro, some Unliving tribes benefit from the strange form of symbiosis developed by this infectious organism. After thousands of years of selective evolution, lepront emerged from others Vatters; its most characteristic feature being the so-called mycodermis, a fungous skin with protective and nourishing functions, which keeps lepront company for its entire unlife. Nevertheless, there is a fatal downside tied to this fact since for living - especially carbon-based - beings, lepronts present a permanent biological hazard. Whoever comes to closer contact with them is destined to become seriously ill, which is one of the reasons why are these creatures strictly banned from entering the centropolis. These days, the majority of lepronts are concentrated in vast leprosaria on the Periphery of Min'Ora.

Lepront's fungous cover is pliable and one could say that to a certain degree, the Unliving "tailor" it to their own needs by using traditional techniques. The individuals create complex protuberances or decorations on their bodies; each brood has its own unique realization and theme. Lepronts are resilient and hot-tempered by nature, which might be the reason why their history is full of hate and revenge. However, they regard the separation from civilization as their destined fate, preordained by higher power.

Only a handful of rare occurrences of lepront outside of its community was recorded in the course of Miners' history. Such an event always cause a major commotion and panic among the civilians. Luckily, lepronts themselves are usually anxiously afraid of the outside world and do not leave the leprosaria intentionally. The statistics say that 78% of reported sightings of a lepront are doings of masqueraded pranksters. The remaining 22% are acts of bioterrorism.