Ligan is the most common indication for an ordinary member of Liga operating in any of Ligan Team (cor. Dinnar).

Ligan is undoubtedly the peak of the career of most order guardians from the whole stringified multiverse. It is very difficult and dangerous elite occupation.

Boss of all Ligans and the whole Liga is their only direct supervisor, Liganor. 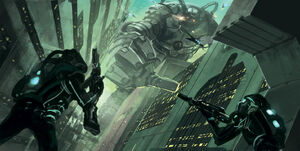 Liga was founded in 4044 Tu. The term Ligan formerly denoted any ordinary employee of the office. However, shortly it narrowed to indicate only the members of the operational teams. These days, civil employees of Liga are colloquially called ''Ligaro''.

Initially, Ligans are hired only from Cosmopolitan Worlds. Liga's founder, admiral Pachdan, soon decided that the gates of the office should be open to all nations and communities - each world has its own unique know-how and specialists, who can effectively complement. Thus since 4055 Tu, Liga accepts novices from all corners of Coraabia. Virtually every advanced world has at least one representative in Liga - however, that ligan has to give up his nationality and is strictly forbidden to prioritise the concerns of his home planet before other.

The occupation is an high-paid elite position, yet it comes with a lot of risk. The individual is under constant pressure and permanent threat of death. Often happened that Ligan completely collapsed from doing his job, or ended up in a lifelong care of neuro-kyberens. Occasional suicides are no exception.

Ligans really appreciate their job and most of them value it as the highest career goal. Sometimes happens that some other influental interest organisation, like the mercenary Sol caste, overpays some Ligan. In case an corruption case appears, given Ligan immediately leaves the office, without any compensations and commissions.

Ligan is the highest position in Agan security forces, which, however, doesn't allow them to command other armed forces in any way. Liga is executively strictly divided from other military forces. Yet there are a lot of transplanetary guidelines and pacts that allow Ligans to independently operate on most of the advancer worlds of Coraabia.

There are two ways a novice could become Ligan:

Admission (so-called ''Lig-mar'') - A novice volintarily logs in to a service in Liga. For his acceptance then speaks the maximum of achieved capabilities and knowledge, experience in the field, reccomendations from other security offices, participation in some of the wars, or high officer title. Self-adepts are approved by the authority Lig-ra and confirmed for the duty by the very Liganor. Admission for Liga is one of the most demanding at all.

Addressing (so-called ''Lig-dan''). The authority Lig-ra itself reaches a decision that a given individual is worth of addressing. Rejection of the membership of Liga is taken as an expression of disapproval with the attitude of Agan gomernment and a slander. Adressed individual that rejects the offer has then forbidden access to Liga for at least ten years. There ar even known cases where the rejection lead to deportation and lifelong ban on entry to Cosmopolitan Worlds.

Ligan often divide themselves into Mars and Dans. Dans often blame Mars for they have been accepted automaticly based on the direct addressing, yet Dans had to beg to be accepted to the highest protection authority. However, a survey revealed that those two groups are qualitatively overlap and that it is only an artificaly fueled rivalry between the individual members.

On their missions, Ligans operate almost throughout the whole Coraabia. They posses the the latest equipment and technology that dramatically quicken their actions on missions and make them more effective. According to signed agreements, Ligan has the righ to use any legitimate means to law enforcement, including the alienation of property, destruction of civil targets or use of diversionary tactics. Ligans then use those competencies according to individual beliefs. 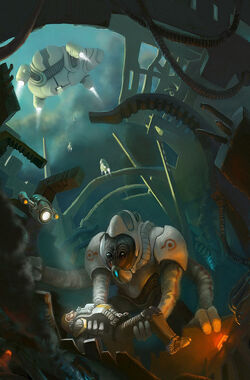 Ligan Bukten during a salvage of civilians after a terrorist attack of Bai'ala on Kogan • 4245 Tu
(Coraabia Artist: Łukasz Matuszek)
Retrieved from "https://coraabia.gamepedia.com/Ligan?oldid=28303"
Categories: