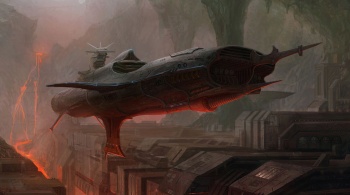 Magrav is a general name for the biggest interplanetary ships used for transportation of civilians, armies, or cargo. Magravs do not meet physical norms for oscillating via strings. As such, they mostly resort to their bi-ion engines that help them cover the long distances between individual planets in a single star system. Magravs are often used for transporting large volumes of cargo from the strings to their nearby inhabited worlds.