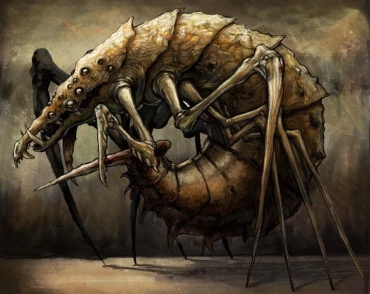 How is that possible?! That little bug shook the history of Ulgs more than our whole glorious fleet of wakkens! -Tektonik Sqquuknu
(Coraabia Artist: Ali Tunc)

There have been two eras in the modern history of Ulgor – before the Marrdac plague and after it. It all started out so innocently. Ulgs discovered a new species of meta-insect by the lava fountains of Marrdu located in the north of the planet. They found out that the secretion contained in this bug's sting can be used as an outstanding medicament. The bugs were bred and used commercially on a large scale. Breeding them gave rise to a whole new industrial branch on Ulgor. But the Unliving insects spreaded out of the farms to the towns, there they got infected by the Ulgor itch. A random mutation created a brood that proliferated quickly in the cities, spreading deadly doses of modified toxins among Ulgs. That's how a pandemic of Marrdac plague started in 3930 Tu, which reputedly slaughtered up to seventy percent of the local population.

Rumors say Ulgo XVI, the meta-king himself, let the bug contaminated in order to 'cleanse' his overpopulated empire from the weak. Still, the fact is that Ulgo's fabled harem was dramatically affected too, a disaster the ruler would had allegedly never allowed. Some conspiracy theories speak about an intentional biological attack from WaalkWak.

After centuries of ongoing disinsection, the Marrdac bugs' population was practically wiped out from the face of Ulgor. Nobody wanted to risk another epidemic breakout. However, the bugs are captured near spaceports on the other worlds from time to time. It is believed that they still survive inside magravs coming from Ulgor or some nearby solar systems.