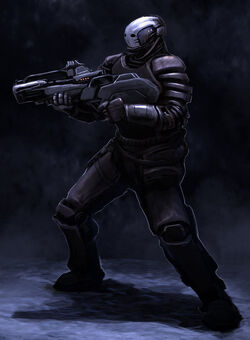 Ambitious Mastodontha was transfered to the elite Bahoofa force as a young Kop. He excelled in marksmanship and tactics and his performance in action was flawless. Bahoofa is usually formed of only Baels and so the young Miner had to face many hardships. Mastodontha tried to gain colleagues' respect by harsh methods and arrogant behaviour towards not only suspects, but also witnesses, members of other law forces and even random passerbies. Despite his efforts to match the Baels, he was awarded with only silly innuendos and ignorance - much to his searing anger.

In his effort to be as good as his skeletal colleagues, Mastodontha resorted even to biochemical enhancements. He gained incredible strength for sure, however, the substances he used had also wide range of nasty side effects. At the end, Mastodontha bought a quallity corabit exoskeleton for his trin savings, that allows him to operate along the Baels.

Mastodontha always dreamed of being Bael himself. Once, while being wastedly drunk, he even decided to get his face skin and muscles removed in so called Facial osterisation. When he woke up on the operating table, facing the bribed xennosurgeon, he jumped through the window, screaming, before the surgery could start. This story amused the Baels so much, that they finally, after so many Tu in service, accepted him among them.