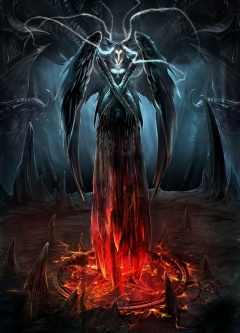 A contemporary depiction of Mat-Puk - a hermaphrodite being with immense psionic power. None of the totems from the era of Mat-Puk visions survived to this day, so it is not possible to confront the authors vision with history. Oral tradition considers the "Mat-Puk era" more frightening than the invasion of the Metallons.
(Coraabia Artist: Ant)

The first of the so-called Mat-Puk visions, which forced all people from the Aab village to cease their activities and embark on a slow voiceless walk to the north had no witnesses. Nobody could be found to speak of their mesmerised expressions in the faces of the black-eyed Baians, who carelessly walked into the Belaaj river and let themselves to be taken and drown by the current without any resistance. Hatred filled the surviving relatives, who blamed the White Eyes for this act. The Mat-Puk vision did not however differentiate the eye colour and always ended up with a death. It is said that once did the column of puppets walk for six days, before they were killed by the forest - be it poison, predators or from dehydration. Only few knew, where this phenomenon came from. It is estimated that millions lost their lives across the continents due to the vision.

Mat-Puk is a powerful hermaphrodite essence, which has to be continuously fed, otherwise it will simply take what it desires. In the ancient times, the possession of Mat-Puk was a subject to quarrels among the Shams, which have slowly outgrown into brother-killing wars. When the war victims were not sufficient, hundreds others fell on the sacrifice altars. Totems were cut in form of a double-headed winged being, whose surface glistered from blood.

The members of a secret renegade Shaam sect The Red chaalk observed the decline of power of the Blacks and White Eyes. It was them, who substituted the Mat-Puk essence to the Shaams, which was found ages ago in the depths of the planet. The essence randomly played with minds of higher beings, before it managed to consume itself - this was the fate of the majority of the Red chaalk members.