Min'Ora is an ancient Unliving city-state on Coraab, which is mostly composed of conurbation of two big cities - Mino (cor. Pit) and Ora (cor. Corabid snake). 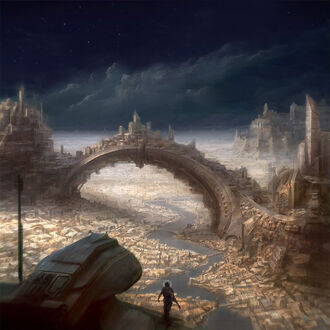 Min'Ora is the most important and traditional center of the Unliving. It is also the only area on Coraab outside the jurisdiction of the laws of the planetary government seated in the centropolis C'Ora. Other powerful executive bodies like the InCorps or Bahoofa are also powerless here.

With 79,000,000 inhabitants, Min'Ora is currently the second largest settlement on Coraab.

Min'Ora is a traditional seat of the main spiritual authority for most of the Unliving tribes - The Irradiated One, has been seated in the Bonehall for whole millenia. Bonehall is viewed by local and even C'Orian Unliving as a sacred place of higher spiritual substance.

This city-state is the primary power base for most Zombs on the planet. Allegedly, as much as 96,4% of this small but powerful Unliving tribe unlive here.

It was within the premises of Min'Ora during the rule of Pasha Raabdwa when Yach-Log, the most sacred compendium of Unliving tractates (min-logs), was written down.

A part of Min'Ora (specifically the city Mino) has not be xotized yet. Tals in Ora pay with Xot all the time.