Miners themselves call their culture Tal (Tal'Orakh). The derived meaning of the word today is Lord. 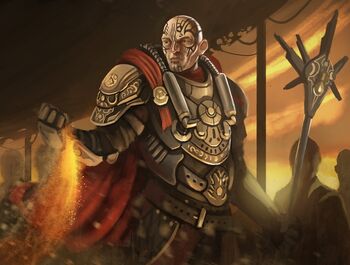 Tal Makard - his brother Nakataar ordered him to built the biggest structure in Coraabian history - Makard Dam. Makard did not live long enough to oversee the finishing touches on this eponymous wonder.
(Coraabia Artist: Eoghan Cowan)

Miners are the second most populous race on Coraab, after the Unliving. It is an advanced humanoid civilization with distinct traditions and nature. They are often viewed as arrogant and ruthless colonists, xenophobic conservatives who once conquered a foreign world and stole it from it "native" population - the Unliving. According to various analyses, the Miner culture has reached its peak few centuries ago and has been systematically eroded by various races and cultures coming to Coraab from the rest of Coraabia.

A typical Miner lives between 70 and 170 Tu. Miners used to get full-body tattoos of their family insignia but this trend has lost its mass appeal in the current age. Many peculiar characters who deeply influences the history of Coraab were of Miner origin.

Coraab is not the original homeworld of Miners - that planet has actually remained unknown till today. For long centuries before their arrival on Coraab, Miners had been cruising the multiverse on their gigantic bi-ion magravs. Old Miner logs hint that their route to the middle of Coraabia could have led around Sheren-Ssa roughly 5000 Tu. Miners must have also missed the Cosmopolitan Worlds themselves, whose ancients records mention frequent encounters with some travelling people knows as Talga, who were crossing through remote parts of Agoadan.

It could have been there where Miners learned of the wasteland region between Cor'Og and Iontachor, which made up for its hostility by the immense riches waiting on the surface of its planets. It is confirmed that Miner prospectors colonized more worlds on their trip to Coraab, as fragments of their technology were found on dumpworlds like Rybbt, Ysaan, or Zels-Hemek. It is puzzling that Coraab is currently the only known planet in the multiverse where the Miner civilization survived and took root. 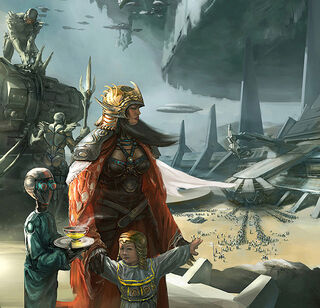 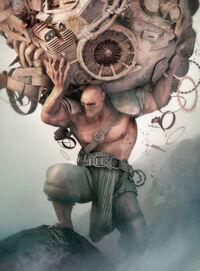 A contemporary visual piece asking Miners to join the construction of the centropolis C'Ora. A popular slogan was: Khe Mao'duorh! (Put your hands to good use!).
(Coraabia Artist: Pascal Blanché)