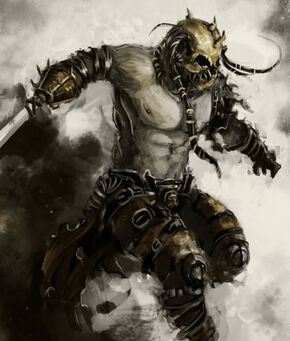 Mono is still the most common subtribe of Coraabian Dungs today. Mono Dungs took part in pretty much all major historical events – in the days of the mighty Miniz, they co-founded the city-state Min'Ora, they fought on the Ilokaj side against the Atomic Empire, they formed the bulk of Unliving slaves in Miners' colonies and a thousand years later, they built the first foundations of C'Ora. Their numbers have been systematically decreasing in recent centuries, yet Mono Dung still maintain most of their traditions and rich history alive. They are notorious for their violent and aggressive nature which compels them to stir up conflicts over complete banalities. Within their communities, however, they are bound by a complex system of rules and they are led to boundless obedience to higher tribes.

It is said the ancient Nu'Zombs bred Dungs from the original and long-forgotten tribes because they needed physically fit and obedient servants, who would not have the intellectual capacity to effectively overthrow them. Together with Zombs, Mono Dungs are one of the few Unliving tribes not worshiping the divine Nu'Beings, a belief for which they were often persecuted in the past.

Mono Dungs have strict criteria for their reproduction. When a new individual emerges from the vat, he is immediately thrown on the Yum'Thung, the sacred scales. If he does not outweigh the Konstone placed in the second bowl, the other Mono scar him on the forehead and throw him into the vat for few more Tols. If the Mono fails to outweigh the stone again, he is then ritually torn to pieces.