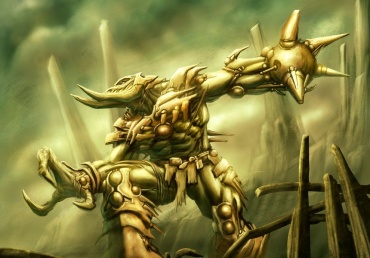 Nicknamed Mugu the Great or Mugu the Hollow Fist. Already during the time in Vats Rekrmich, he was an unliving legend. From the rusty battlefield of Un-Nom-Pak he emerged as a grand champion in position of Du'Nom. It was Mugu who sent the infamous Choggo of Son-Pataj batch back into the eternal reproduction vat during the Vat League finale in 4256 Tu. The Dung slayer got rid of the greatest rival and seized the world of wrestling for himself. The unexpected twist came in the Ro'Tol match against Joobo-Habuta in 4270. Mugu tossed a thermal grenade into the non-conflict zone and in the ensuing chaos he and his teammates murdered dozens of government officials. The long-prepared dung uprising was born, that would later be known as Gu-Rang.

Before the match, Mugu allied with his nemesis, the feared Xurug of Joobo-Habuta. Xurug and his team were supposed not to interfere with Mugu's plan, so that their reputation remained untainted and after the conflict, Xurug would become the new champion. Turning from wrestler to revolutionaire was the greatest sacrifice that Mugu could have made for the suffering Dung community.

Mugu never wanted to become an Un-Nom-Pak champion. Wrestling was just a mean for strengthening his position in the hierarchy of the Unliving tribes. Dungs higly respect Mugu, even after the events of Du-Rang. They call him B'Uma's herald (herald of He-Who-Crawls-From-The-Vat). Intergalactic Hermes and his Armos however muck him, calling him Labek (Vat mange).