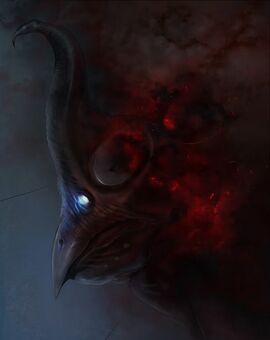 The term mutarch is usually used for radical members of the Z'tran race, which is unique for its characteristic anatomy. These poly-gas beings can grow to the height of five meters while 90 percent of their body volume consists of bio-materializing gas. A resistant skull with a central brain amounts for the remaining 10 percent. The bio-materializing gas fulfills all important life functions including communication and reproduction. The gas is sucked into the skull chamber, where it is heated and brought to a controlled biochemical reaction - a process which generates a characteristic rumbling sound. The process of materialization changes the otherwise tall and frail creature into a doom-bringing mass of muscle. Mutarchs are often being hired for showy contract killings or intimidation.

The reason behind radicalism of mutarchs lies in their abandonment of the original Z'tran ways. They have forsaken the God of the Beginning named A'tooh and devoted their lives to spreading the songs of Hoot'a, the Endbringer. However, their methods are seldom met with much understanding. They keep imposing themselves on others and do not hesitate to use violence when insufficient attention is given to them. The situation is worsened by their refusal to communicate in other languages than their own.

Mutarchs first appeared on Coraab around 4220 Tu. During a routine check of a magrav from Yttor, a hundred of deep-frozen individuals were found on-board. Only thirty of them survived the following decryonization. Upon awakening, the confused mutarchs brutally assaulted the rescuers, pecking several of them to death. This was the first from a long series of brutal murders conducted by these merciless beings on Coraab.