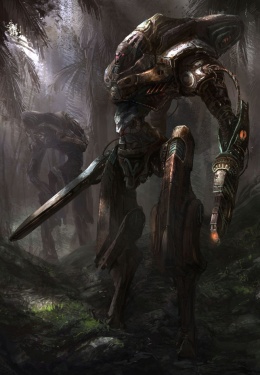 Mycoborgs are extremely effective in battle. The only drawback is their long activation time, which drastically reduces their flexibility.
(Coraabia Artist: Wanbao)

The idea of the famous techno-Wak SqannnK to create a hybrid unit which would be a synthesis of a cybernetic exoskeleton and Xaon mycoid covering a living soldier (granting him unexpected powers), was not initially met with too much enthusiasm on WaalkWak. Opponents attributed the prototypes with numerous shortcomings and the public opinion was concerned with possible leakage of mykoid remnants that could spark the mycosation of the atmosphere. SqannnK, however, disproved all these rumors and half-truths, manned the central units with individuals lacking the genetic predisposition to mytosporization and reduced the total activation time of the bio-body to mere two minutes. Mycoborgs have been serving in the Wakian army ever since and perform an excellent job.

The activation process of the bio-body goes as follows: a surgically transformed soldier lies into an open harness that wraps him in a so-called senzomytosis. Metal casing is then spread over the symbiont to provide protection and firepower to the soldier's extended consciousness. A mycoborg has lightning-fast reflexes and effectively utilizes the best of his both parent lifeforms.

The average lifespan of a mycoborg in full combat deployment reaches only twenty Tu. After this period, the modified organism of the Wakian soldier is too exhausted to support its basic life functions any longer. The mycoid dies along the soldier as well. Because of this obvious drawback, working as a mycoborg is one of the highest paid positions in the military of WaalkWak.