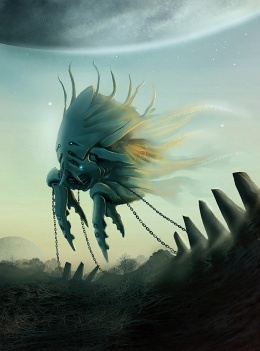 Mycorg is one of the most dangerous evolutionary stages of mycoids. This organism is existentially dependent on the planetary conditions and cannot be found in space. The titan-like currents of mycoids lack a natural enemy on their journeys accross the multiverse and for that reason they do not spend any effort on evolving their defenses, while present in vacuum. During mycosation of a planet, however, they can meet significant resistance. This triggers a quick mycorg production in the contaminated area. Their difference from the common mycomass is in their resistant armour and sizable sacs filled with strong bio-acid. When a mycorg manages to consume a sufficient portion of the atmosphere, it can grow to an unbelievable size of several kilometers. Once the danger and all resistance on the mycosated planet is eliminated, the fighting mycorgs die shortly afterwards.

The only existing pictures of a mycorg were taken by the extreme sub-porter Ker-Mid during the ominous mycosation of Meugo in 4231 Tu. It depicts a creature approximately kilometer long floating through the sky, while spraying acid on the metropolis underneath it. Ker-Mid was one of the lucky few, who were evacuated in time and survived the horrible catastrophe. The unique shots earned him a small fortune.

Techno-Waks were supposed to breed a mycorg in artificial conditions as a potential super-weapon. The creature always died before it could fully develop, though. This information is most likely yet another conspiration theory, though. While the Wak experiments with mycoids were truly proven at one point, this dangerous sort of research would never by allowed by any government.