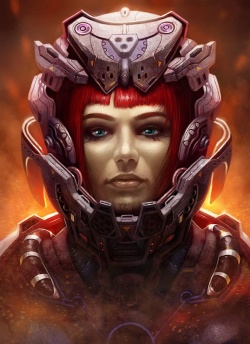 Nirah first came into public spotlight during the Val-Mag incident, during which she arrested the feared bosses of the local chaalkomafia. Her success negatively impacted an important contract of the agency Bonnax, sparking interest of its boss Eluk Bonn. Eluk met Nirah soon afterwards and chance had it that the young Mograta and Werdio became passionate lovers. Under his strong metallic hand, Nirah underwent elite combat training which honed her natural abilities to perfection. As time went by, their love slowly died out and the more and more detached Nirah pondered a possible departure from Bonnax. Nirah eventually leaves with significant support of her false "friend" Zar fom the Sol caste.

After Nirah left Bonnax, Eluk Bonn accused her of stealing sensitive data from the agency. This forced her to quickly wobble as far away from the Cosmopolitan Worlds as possible. It is true that Nirah stole the data from Bonnax - the detailed client database ensured her many juicy contracts in the vast multiverse. While her career has been skyrocketing, Nirah was hatching plans for her revenge - the treachery of Sol Zar still boiled the blood in her veins.

Nirah became one of the richest contemporary solo mercenaries. One day, she accepted a contract which brought her to Coraab and allowed her to get rid of Sol Zar once and for all. The usually focused Nirah fails in her task - disturbed by law enforcers, she kills one of them in self-defense. After a crazy chase with a whole kop unit, Nirah prematurely leaves the planet.