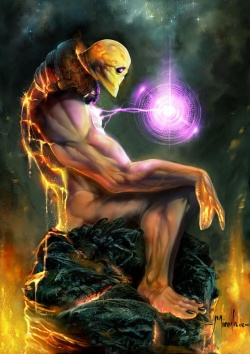 Legendary creator of high Unliving tribes, patron of Ilokai tribe and whole Coraab. This is how most Coraabian Unliving see the mythological being known also as Irh'Ilokha, the Ilokai breeder. Not everyone respect him as god though - Zombs, Atomi and Wigitas often mercilessly persecuted and slaughtered his worshipers. The high-born Unliving refused to admit any relationship to "sac smear", as they most rudely call the Ilokai. Nu'Ilokai supposedly lived on Coraab before it was covered in toxic Dump - its discovery is believed to be a punishment for Coraabians mocking Ilokai and their beliefs. Nu'Ilokai is usually depicted sitting, because he sat on Coraab with all his essence and never left.

Nu'Ilokai is said to be mute, as he never spoke to anyone. That inspired many Ilokai to follow his example and to never use any verbal expressions. Ilokai cult considers sound to be disturbing element that defiles structure of the spacetime. Music is even considered an instult of the god himself. In orthodox Ilokai communities the music is strictly forbidden.

Nu'Ilokai is of course just an fantastical construct of fanatic Unliving liturgy. Today it is a common knowledge that the Unliving got on Coraab at the same time as the Dumpers and that their servant race was an artificial creation of the Haze Culture of Pthars. Some say that no Nu being ever really set foot on Coraab and that's why Ilokai, feeling utterly inferior, created a myth of their own patron who would uplift them.