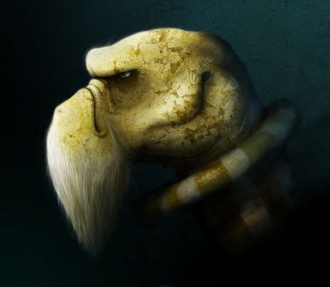 A once important professor, who devoted his life to seemingly unrelated fields of xenology, genealogy and among many others - even the numeric analysis. Until he gained his professorship, Bolgo worked on important annorean universities. After some time, he lost interest in teaching his fields on Annor despite having received prestigious dean job offers from several universities. In response, Bolgo said that it is not needed to teach, where the given field is already well known and described. Professor's journey around many universities of the multiverse provided him with enough material for an autobiographical travelogue, which Bolgo wrote himself on the last stop of his career - on Coraab. In his work, he concluded that the potential of xennos is ridiculously underestimated outside of the Xenozone.

The old Bolgo's end was very infamous. When the weight of his age fell upon him and dementia took his mind, even the simple lachtos from the streets would outmatch his intelligence. However, it was not solely the aging to be blamed, but rather the daily drinking of yaff, which the professor liked to flavor with illegally procured ethanol. The disreputable origin of the substance caused the poor scientist a widely spread brain tumor that could not be operated.

Surprisingly, the professor Bolgo was allowed to spend his remaining days on the grounds of the Orbital university, which he considered - in bright moments of his remaining intelligence - as an act of recognition for his glorious past. In reality, the professor himself served as an object of study, since it was revealed that his tumor is a strange form of unlife, which most likely lived in the residuals of an old reproduction vatt used for fermentation of synthetic saccharine for ethanol production.