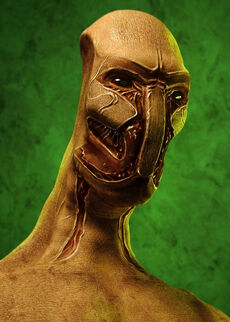 Olong - a lonely Bumaar with a grim destiny. Will his escapades earn enough to pay for a costly eye surgery?
(Coraabia Artist: Adem Can Baykal)

Olong used to be a handsome young boy raised in the immigrant Bumaar community. Yet when his xenophobic classmates poured acid on him as one of their "pranks", his friendly Bumaar face never saw smile again. Disfigured, Olong withdrew from the society and longed for a revenge. His family became a target of gossip throughout the whole Bumaar community because of the asocial son and Olong was eventually forced to flee away. Thus began his long and lonely life as a petty thief without home. Olong has no associates and works strictly alone. When Sorot the Tout asked him to join Zapraskal's gang, Olong replied with open gunfire.

For his mugging, Olong prefers deserted corridor where he also builds his ingenious hideouts. Following the tactics of hit and run, he strikes and hides right next to the crime scene - the police searches everywhere but in the false wall before them. The darkest place is under the candlestick holds perfectly true for Olong.

Olong tries to save most of the trins he earns in hope that one day, he will be able to afford a cosmetic surgery that would allow him to integrate into the society again. He is running out of time though - the last few Tu have cursed him with a slowly advancing chronic form of glaucoma.