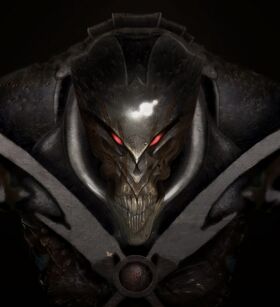 For Coraabians Omega-bot quickly became the symbol, reason to hate Reddas - it was Omega squads who massacred thousands of innocent civilians on Coraabian Orbital University in 4179 Tu. Red command needed specialised units able to fight in close quarters and vacuum - Omega-bot chasis is made of complex array of bio-compressors, that allow it to alter shape and structure of its body - the machine is able to change its functionality during combat - it posseses multiple power tools and meele weapons in its limbs. Today, Omega-bots form the backbone of Redd assault forces for space and on-board combat.

Coraab secret services long thought Omegas to be bio-cyborg prototypes in mechanical suits. It was impossible to get hands on even one exemplar - Omega-bot that is fatally damaged opens its inner vat of bio-acid that melts all non-metal parts in a matter of seconds. Only blackened steleton of a destroyed bot can be found.

It is a sad fact that bio-acid used in Omegas, 9-KUUL, Reddas buy on Coraab through their bribed intermediaries - Coraab is unknowingly supporting enemy war machinery. It is so even though according to Coraabian laws trade with Red command is a crime for which there is only one punishment - death.