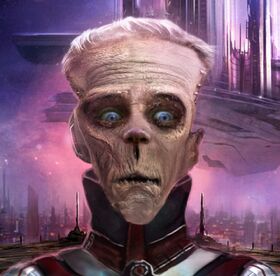 The founder and ideological leader of the Liga, the first liganor selected for the office. For Cosmopolites, Pachdan remains a very contradictory person - some admire him limitlessly for his work, which he achieved by forming the most powerful security organisation in Coraabia, many others forsake him for a series of contradictory decisions and directives, which Pachdan issued during his almost sixty-year long presence in the Liga. Pachdan's star was rising very rapidly in the beginning of his career, mainly thanks to his analytical geniality. In 4010 Tu, he was promoted to the highest rank of ganu after leading successful military operations on Ri-Das and Eppek. At the time when the agan prefekt Damasu pushed forward a resolution to create a new organization of interplanetarry defense, nobody from the participating officials could think of anybody else from the Cosmopolitan worlds more suitable for this role.

Pachdan was often criticized for surrounding himself with untrustworthy persons. Ligans also never forgave him that he extradited the famous Modhra from the Team 2 to the bureaucrats, who staged a chase-like monster-process ending with the ligan's execution. One part of the public also critized Pachdan for his verdicts stating that Mograts are but an "agoadanian silt".

Already by his introduction to the office in 4044 Tu, Pachdan was terminally ill. He suffered from the Zeup-Jelentek syndrome all his life, which was worsening as he aged. Expensive healing procedures were able to suppress the illness' symptoms, but the liganor was not capable of walking in the last few decades, suffered from unbearable phantom pain and could articulate only with great difficulty. In the end, the death was his deliverance.