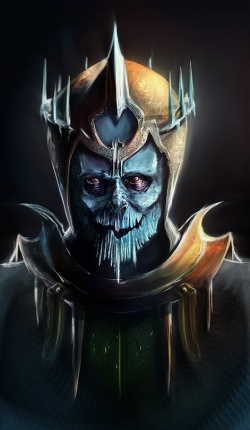 "Walking the dim paths in the stars / Nu'Ilokho our nation leads / Remnants of a feast of cultures past / We are the process stripped of needs. / Then the chains arise that rule us desire / those will be doomed to a death dire. / Into the ruins of Wa'Ghra I shall peek / at what is left from my ruined dreams / Like a corabid snake I shall seek / curling with flow of the dark streams. / Let us listen to the past / how by the world our life was given / The time to act is here at last / To follow the fate by our hands now driven." (the poem Handfuls of rust, 4185 Tu, autor: Tuoraa) The Ilokaj admirer of coraabian history - Padatuo was trying for a long time to get appointed to the post of the unliving attache on the distant world of Qu-Puo. He was not accepted and thus remained in C'Ora, where is kept studying the unliving liturgy. After his studies got more difficult due to the coming blindness, the Ilokaj returned back to Min'Ora - where he was born - with a double-edged dictum: "My eyes have seen through".

Padatuo played out a his game of intrigues on the soil of the unliving city-state and thanks to his superb oratorical performance, in 4269 Tu was named by the Skeletarchy to the function of the higher diplomatic attache of Min'Ora, the so called Drogg’Mino (The voice of Mino). With this gesture, the Supreme Irradiated made a kind act towards the ilokaj community, as this prestigious function was only held by Zombs in the latest few centuries.

The blind Padatuo boundlessly admires the ancient wigit thinker Raabdwa. Charmed by his work, he keeps writing poems under the pseudonym Tuoraa. In the poems, he expresses his revolutionary ideas undermining the authority of the coraabian planetary government. His secret identity remains hidden from everyone until the end of his cycle - from his diplomatic position he cannot afford to express such explicitly radiated tendentional stances.