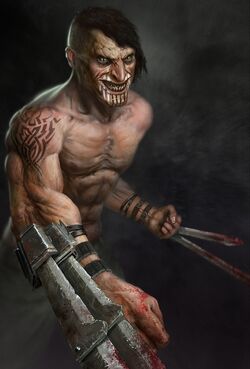 Once older, Partengl would much rather rip excess fabric from his secretly produced clothing creations than through Pentagoras' victims.
(Coraabia Artist: Maxim Verehin)

Already as a child, the physically gifted Partengl was taken under wings of criminal mastermind Pentagoras who allowed him to develop his talent even further. As an orphaned child, Partengl lived in a xenocircus Xaaxox, where he was given a decent acrobatic training. There he also very quickly found out how to skillfully rob the spectators in xapiteau. When he once tried to pilfer from a weird toothy man in a decorated robe, Partengl was unexpectedly caught in the act. Instead of a cruel punishment, which street smart Partengl expected, the unknown xalien offered him cooperation. The young Miner whole-heartedly accepted. Pentagoras provided him with everything Partengl never had - his own accomodation and more money than he ever saw in the circus at one place. In return, Partengl had to sign a lifetime contract.

Partengl's acrobatic skills come in very handy during his escapades with the eccentric patron. Pentagoras accepts only perfect performance - artistic crimes are planned whole Tu in advance and Partengl spends long [Tol]s by methodically practicing every single step. He even sews his own costumes, which is paradoxically one of his favorite parts during each crime.

After long years of slavery, Partengl's dream is to leave the more and more crazy Pentagoras and found a clothing company. Several times has Partengl escaped death by a hair's breadth and the acrobatic stunts are not becoming any easier with each passing year. Thus Partengs is patiently waiting for his opportunity.