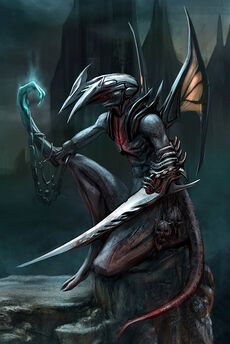 Phytomorphs are tri-buroten-based intelligent creatures capable of adapting to virtually all kinds of environmental conditions. Some are able to selfcharge themselves with solar energy while others can feed simply by inhaling planetary atmosphere. Phyto-ghoul is a predatory phase of a phytomorph that needs specific enzymes found in the bodies of carbon-based lifeforms. This incredibly nimble flier suck its prey dry with two tubular proboscises, leaving the body otherwise intact after obtaining the necessary nutrients. For a long time, phyto-ghouls remained unidentified as the cause behind mysterious dying out of ruuk herds in the remote parts of CuCaan. As masters of camouflage, phyto-ghouls are able to "solder" the incisions they make on the bodies of their prey with makeshift replicas of the affected tissues.

Phyto-ghouls are actually timid creatures that kill only in order to feed themselves. So far, there have been no records of any civilian attacks from their side. Despite having no speech organs, they are considerably intelligent and communicate with each other through broadly diffused pheromone clouds that are almost untrackable with conventional equipment.

Catching a phyto-ghoul alive has always been a virtually impossible task as these creatures are able to reach incredible speed in a dive while still retaining the capacity to change their flight course in a split second - literally touching the limits of physical laws. Witnesses usually describe phyto-ghoul's flight as gleaming of a glittering shade. The few located phyto-ghoul bodies are treasured only in the most prestigious museums in Coraabia.