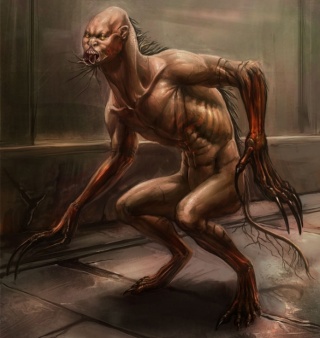 Pismealh was finally hunted down by mercenaries hired by Those Who Have. Min'Orian bodies always came short.
(Coraabia Artist: Marissa Rivera)

Known also as the Cannibal from Habutat. Pismealh had been a nightmare for years for Min'Orian police forces and the agony and crime columns of many sub-journals on Oroi are still full of the vilenesses he committed. Pismealh always singled out a lonely tourist and offered himself as a guide. If the said person rejected his offer – which happened all the time since Pismeahl stinked and lisped incomprehensibly – the cannibal stalked him straight to the hotel where he ripped into his throat. He used to take away only certain parts from the bodies of his victims, usually eyes, tongue, antennae or sacs. When finally caught in his underground hideout, a varied collection of organic parts coming from members of almost 20 races was found there.

During the ensuing interrogation, Pismealh said he desired to be a tour guide for Min'Orian places of interests his whole life but was never admitted into any guild because of his looks and manners. Thus, he treated his inferiority complex by killing and eating innocent tourists. Pismealh believed that eating specific parts of their bodies would give him necessary strength and knowledge.

Sadly and paradoxically, Pismealh was released on high bail after long years of rotting in jail. The notorious Khuzdul took him under his wings only to be later identified as one of the most dangerous cannibals in modern history. Pismeahl worked for him as a court taster for the rest of his unlife.